A fun, new, short film I ran across online, the Solomon-produced 12-minute documentary titled “The Chairlift,” got me thinking about these mechanical devices that are so essential to downhill skiing as we know it.

While self-powered backcountry skiing is growing by leaps and bounds, almost every skier or snowboarder first stoked their snow passions by riding chairlifts and skiing within developed areas. It is probably the single greatest invention related to skiing, and did more to popularize the sport than any other development.

James Curran created the first at Sun Valley, Idaho, for the 1936–37 season with financing by Averell Harriman, the former governor of New York. Curran, who never skied, was an engineer with Union Pacific Railroad, which then owned the fledgling ski area. The single-seaters were modified from banana conveyor systems built to load cargo ships in the tropics. The basic design remains in effect today. Mt. Tremblant in Canada installed that nation’s first chair in 1939, and Europe saw its first erected in Czechoslovakia in 1940. Aspen received its first chair in 1947, and Squaw Valley, California put up a double chair in 1949. The post-war American boom saw hundreds erected nationwide, and skiing as we know it began to emerge.

Ernie Blake installed New Mexico’s first chair, 2,600 feet long, at the Santa Fe Ski Basin for the 1949–50 season. It was composed of abandoned mining cables picked up off the ground in Silverton, Colorado, and seats salvaged from B-24 bombers. The cables, forged in 1888, were made of Sheffield, England’s famous high-quality steel. With the rust knocked off, and the cables tested for strength, a chair-on-the-cheap was put up today’s Thunderbird to the current top of the quad chair. Ernie’s son, Mickey Blake, once told me that they had a lift operator who insisted on smoking at the summit terminal, and one day as he stood on the grounds of Wood-Gormley elementary school in downtown Santa Fe he watched as the top terminal blew up and burned. But the chairlift survived and went on to a long and noble life. It was retired in 1964, but one of its old seats now proudly hangs on the deck of Totemoff’s Lodge at mid-mountain.

I remember riding this chair, which was quite odd, as it had one cable that pulled it along while it rode on wheels over another fixed cable. It was known to bounce off the riding cable and dangle by the pull cable, and I always watched with some trepidation as it bounced over the lift towers. It was also a super-early detachable chair, which required two men to manhandle chairs on and off the moving cable.

There was an undeniable charm to these early double chairs. They were small, which meant you sat hip to hip, and many a romance was kindled on them. This was enhanced by the custom of filling all seats. The cry of “Single” launched lots of relationships. Getting plopped into a free seat next to a young member of the opposite sex meant some quality one-on-one time, because these chairs were sloooooooow.

That was part of their charm, as they allowed one to slow down and have a long chat or observe the falling snow or the distant vistas. They also meant you could get really chilled on the ride up! I remember being with the younger brother of a good friend at Sandia Peak around 1966 and riding up into bitterly cold headwinds that often blew over the lip of the Crest and straight down the chairlift line. He was in tears by the time we reached the top and we had to duck into the old Summit House to thaw out.

Luckily I’ve never been stuck on a broken lift, and while I like to experience all phases of the ski life, that is one I hope never to experience. Getting people safely off stalled lifts takes hours and hours, and I’ve often looked at the terrain under me and wondered if I’d hang from the chair and drop if marooned.

Everyone has their favorite chairs; even within single ski areas you find people who only ride one chair or prefer it above all others. This mostly has to do with the runs one can reach from any particular chair, but some people grow very attached to the lift itself, and mourn their passing as larger and faster chairs replace them. There’s no denying the detachable high-speed lifts do allow you to get in a lot more skiing, but the close camaraderie that the old two or three-seaters guaranteed is often lacking today on the quads and six-packs, without a single word exchanged between parties.

New Mexico’s first two high-speeds were installed at Angel Fire, and were the only such lifts for many, many years. The Chile Express, launched in 1996, spans 2.5 miles and rises 2,060 feet. It is one of the longest in the country, and cut the ascent time to the summit on three different chairs from some 30 minutes to a dozen or so.

Chairs have also have provided riders with lots of entertainment over the years. They often climb the steepest line on the mountain, and so provide a great stage for hot-doggers. I recall being inspired, and awed, by the skiers I saw as a teen while riding up Chair 1 at Taos Ski Valley over Al’s Run. If only I could ski like that, I thought. And actually the displays were a great way to observe and learn, and today I can ski it nonstop myself. The perch from above also delivered plenty of spectacular crashes, biffs, head plants and yard-sales displays to derisive hoots and hollers.

I also recall the liftees at TSV. In the early days they always seemed to be manned by members of Taos Pueblo, and added to the unique character of that special place. For a period, most lift “bumpers” were youngsters scoring that coveted free lift pass, but today I’m again seeing some older attendants, seeking a paycheck, I assume.

Few of the old doubles still spin. On busy days Ski Santa Fe still cranks up the Riblet Sierra, running 4,200 feet with an 850-foot vertical rise. Taos cut out a little section of Chair 1 and re-strung it as 7A, the short missing link that allows you to get back to the “Top of the World” and the frontside without returning to the base. Pajarito still has at least one of the oldies but goodies running, but they are an endangered species. Most have gone the way of the state’s newest high-speed detachable chair installed at Taos’ base in 2018. It eliminated lines there on all but the busiest days, and a set of lift towers up Al’s of another old double chair that was retired. But a slice of history and the intimacy old doubles engendered also was lost. Time marches on…. 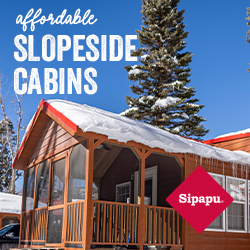 This error message is only visible to WordPress admins


Error: API requests are being delayed. New posts will not be retrieved for at least 5 minutes.